Last Friday Troy Jacques took a break from the bamboo shop at Thomas & Thomas to do some field testing. H

So, Troy, tell us a little about the prototype rod.

It’s an 8′ 3″ nine-weight. I was looking for an action that was fast but wouldn’t feel too stiff, and load nicely with the lines we were hoping to use. We played around with the taper and length of the blank, and settled on eight-feet three-inches as the sweet spot. Nine feet is the standard for saltwater graphite rods, but with bamboo the shorter length really improves the feel, making the rod noticeably quicker and lighter in the hand. A relatively stiff tip helps in keeping loops small and driving casts into the wind, and is a big help when picking line up off the water.


Some of the Sans Pereil rods you’ve produced lately have been hollow-built, how about this one?

I thought about it, because it is a fairly beefy blank and I knew it would keep the weight down, but in the end I opted for a solid build to maintain as much strength as possible for fighting fish. I also added to the swell to give more lifting power.

The blank is resin-impregnated and polished, making it saltwater resistant and easy to maintain in the type of environment you get on a flats skiff – being slid in and out of rod holders and the occasional run-in with a hook. There’s no varnish layer to break – the finish goes all the way through the rod – so slight damage can just be buffed out.


Tell us about the trip.

It was fantastic. We had a perfect day for the kind of fishing we wanted to do, and Jaime put us on plenty of fish. It’s such a complex shoreline around the Vineyard it seemed like there was always a spot nearby that had just the right tide, sun and wind direction to find fish. Jaime made it look easy, but he’s put a lifetime into learning the shifting patterns around the island. The shoreline changes every year – winter storms open new breaches into salt ponds and fill in old ones – so local knowledge is key.

We got into fish from 18 to 32 inches, and saw some that were bigger, over 36 inches. Schools were anywhere from two fish to more than a hundred, and remember this is in really thin water – sometimes only a foot deep – and crystal-clear, so it was quite a sight.


Did the rod perform as you expected?

Overall, I was very pleased – it was just really fun to fish with. We had to play around with some different lines, but once we tried the Airflo Ridge there was no looking back. I was pretty happy being able to cast 75 feet, and Jaime – who throws a beautiful loop – was able to lay the whole line out. One surprise was how well the rod roll-cast, which comes in handy when you suddenly spot fish close to the boat. Having a lot of flex in the middle of the blank helps load the rod when making the D and the stiff tip punches it out. It’s actually easier to roll-cast than a fast action graphite rod.

The one caveat was that the bamboo is, of course, much heavier than graphite. It wasn’t an issue for sight fishing, but I can see that blind casting all day could wear you out. I’m looking forward to trying it out in the Keys, where it’s mostly sight fishing anyway.


How about fighting the fish?

I was a bit concerned about that, but it was fine. There was plenty of power for the size fish we caught, and I think if you’re careful fish over thirty pounds wouldn’t be a problem. The extra-large butt swell goes all the way through the reel seat, and we didn’t feel any flex in the cork even when we “put the wood” to the biggest fish of the day.

Well, believe it or not, the rod isn’t even completely finished – we ran out the door with only one coat of epoxy on the wraps – so we’ll get that done this week. Then, as I said, I’d love to try it out in the Keys, hoping for bonefish and baby tarpon. Snook and redfish would be great, too – really anything you would feel comfortable going after with a nine-weight graphite rod. 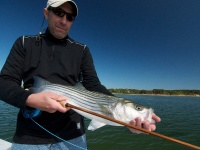 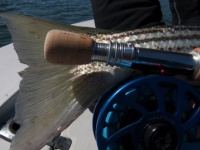 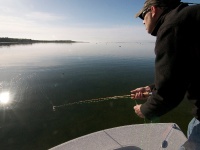 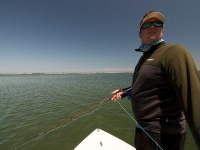