It was Tuesday September 2nd and I was in the middle of the last shooting day of the feature filmBand of Robbers (a modern day telling of Tom Sawyer and Huck Finn as adults) when the email came through:

Girls,
Looking we might meet up either Friday night or Saturday morning and head to the Upper Madison. Floating/fishing/camping Saturday, Sunday, and get back to town on Monday early evening. We will camp at one of the campgrounds, probably Palisades. We figure it will be easier to car camp in the same place rather than boat camp in different spots each night but that can be up for discussion.
Depending on who can make it we need to work out purchasing and splitting cost of food and drink. Tony doesn’t pay.
Also, who will be bringing boats?
Don’t forget your extra…
Hank

On the tail end of this 24 day shoot, with more than enough complicated locations, sequences and camera work, this sounded like just what I needed, especially after missing out on summer hopper fishing in Wyoming due to work.

Being in the film business makes it exceedingly difficult to plan more than three weeks out, but this fell into place perfectly. I locked in a flight knowing that my girlfriend and I would be heading out to Montana for the wedding the following weekend. I figured I might as well get out there a week early and partake in some fishing and festivities.

The weeks leading up to the trip were a combination of confirming the group and dialing-in food, booze, and other concrete plans. I arrived in Bozeman to beautiful weather—70’s and sunny. Knowing that we were going to be camping, and having not brought out any gear with me, a trip to REI for camping supplies was a quick prerequisite before heading out to Ennis to meet Tony and the first wave of the fellas. Of course, I also needed to pick up a pretty serious combination of liquor and mixers to make a cocktail that would end up being signature of the trip: The Man of Leisure.


Tony is a long time friend who I know through one of my best friends from my guiding days, Hank. Both Tony and Hank have been working in the fly fishing and hospitality business for a very long time—from Wyoming to Montana to Alaska and beyond. Tony comes from a generations-deep Montana family and Hank was born in Montana, but raised in the Bighorn Mountains of Wyoming. The rest of the group was a mix of Tony’s friends: Chef Ranga Perera, who spearheaded the food situation with long time rafting guide turned realtor Mike Thiel, picking up more than enough to support our crew to eat splendidly for the weekend; Aaron and Ryan Harder, who grew up with Tony and drove in from Tacoma, WA; and Matt Connors a Montana local.

On this first sunny glorious afternoon I met Tony and Ranga at our campsite along the Madison River for a late afternoon float before the rest of the guys arrived. Aaron and Ryan were going to be there close to dusk and Hank was meeting us in the morning for the first big float higher up on the Madison. Despite our desire to get onto the water as quickly as possible, we set up our tents, readied camp and stowed the food and drink in the bear boxes.

It was a beautiful afternoon on the river, stripping streamers to see what kind of fish we could move and hoping to see some action along the banks for hoppers. We stopped to wade a few times, but as the shadows started getting longer, the temperature began to drop and we could hear thunder in the distance.

All three of us landed fish, and had some exciting takes that didn’t end up with fish to the net. We got off the river in the last throes of a pink and purple sunset, just in time to arrive back at our campsite for some serious weather. Wind, rain, and hail made raising the kitchen tent a challenge. But we overcame the elements with a great fire, some shelter, and stiff cocktails to warm up. The Man of Leisure was the big hit. Part rye whiskey, part Reposado Tequila, Lime Juice, Aromatic Bitters and Ginger Beer, it is a formidable drink to chase out some of the cold and enjoy by a raging fire.


The next morning we got a little later a start than we had wanted to. The brothers’ tents had both taken on water during the rain storm that night, and we had to figure out how best to get all of the gear into one vehicle in order to meet Hank at the boat launch to put-in for the Bear Trap Canyon section. I’m glad that I ended up getting the upgrade on the rental vehicle to a full sized SUV because it took every inch of cargo space to get 5 guys and our gear from camp to the rafts. With the rendezvous complete the group split up into two rafts, we headed down the river toward lots of fishing and the “kitchen sink” rapids. To distinguish the bachelor’s boat from the other one, we were joined by a very adventurous inflatable sheep that took point on the bow of Tony’s raft for the rest of the weekend.

This section of the river flows through a breathtaking box canyon and is now one of my favorite floats that I have been on in Montana. Despite the weather and some slow fishing, everyone still managed to hook and land fish. Mostly, we threw streamers, with Tony landing the big fish of the day—a brown around 20” on the T&T HE 9’ 6wt. That fish took us on quite a run, and combined with my amateur rowing, it made for some excitement.

Later in the day he and Hank successfully navigated the rapids while the rest of us hiked up, around and down, thankful that we weren’t captaining. Some celebratory beers and Pendleton whiskey were had with lunch, knowing that no more rapids lay ahead—only more fishing and a big fire at the end of the day.

That night we got another round of weather that may have drowned out some groups, but only emboldened our revelry. The pulled pork dinner was epic, as was the bonfire and musical performance from Tony and Ryan that accompanied some howling at the moon.

The weekend continued with a mix of challenging weather and tough fishing. Our journey now included three boats, allowing us to float to our campsite for the last night and enjoy an easy time breaking camp and shoving off for our final day of fishing. That planning made for the most enjoyable morning, since the weather broke, too—at least long enough to have some sun, breakfast quesadillas, burritos, and screwdrivers. Nice to not have to start the day with a drive to get on the water.

With very little wind and some sun I mostly fished the LPSII 8’6” 5wt, which most reminded me of the rod that made me first fall in love with T&T—the VE 8’6” 4wt—a real combination of touch and power making it an absolute delight to cast. We started off throwing hoppers at the banks, pleased with any takes on top that we could get, before switching back to streamers and 6wts as the weather changed. Our last day of fishing ended with a rainbow arching over the Madison—and weather moving through the valley in a spectacular show—reminding us of how lucky we were to be out on the water together, celebrating the last days of Tony’s bachelorhood.

The son of a filmmaker, Noah Rosenthal is a cinematographer living in Los Angeles, via Middlebury College and DIII football, via guiding trout rivers of Wyoming and traveling the country with his camera, via an MFA in Cinematography from the American Film Institute. He also tells a pretty good story. See his work at arkfilms.net 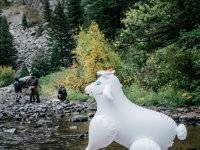 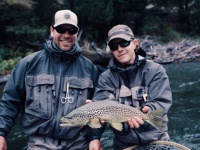 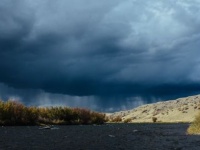 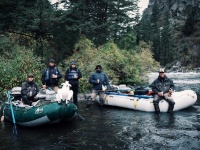 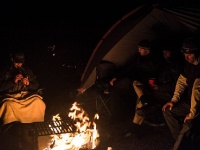 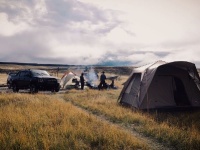 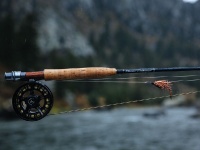 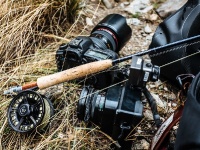 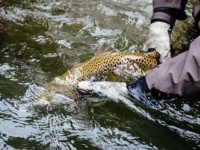 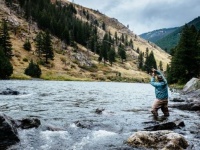