Library Article Fly-fishing stories The One That Kind Of Got Away.

The One That Kind Of Got Away.

A story of heartbreak and a story of success. 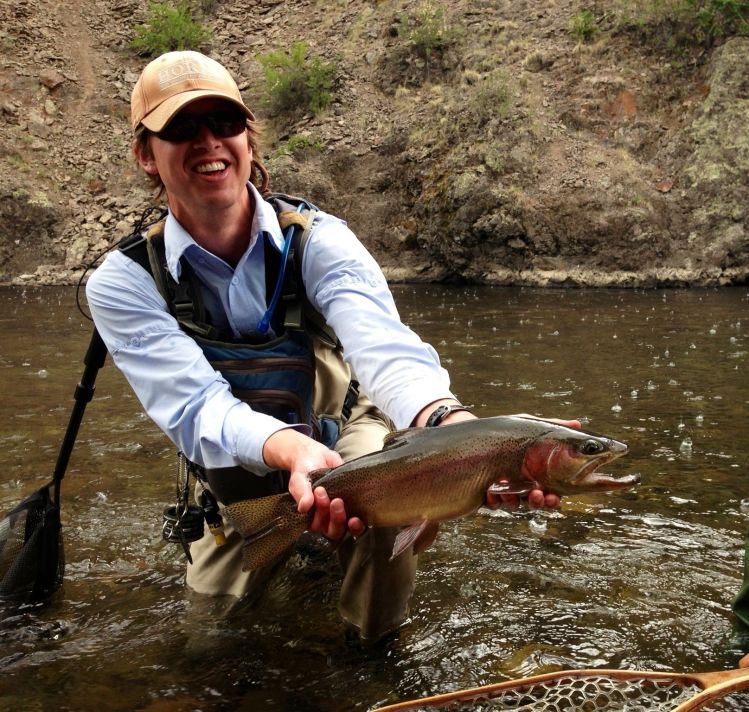 It all started when a great friend of mine named Dan Murphy called me up with a request to contact a guy he knew was as avid about fly fishing as I was, a guy by the name of Ryan Ellis.  I was excited about the prospect of meeting someone with whom I could share my constant obsession with fly fishing.  After a few missed calls on both ends, we finally got in contact with one another and settled on July 3rd as the day we would meet up to fish.

We met up early that morning and after a cup of  coffee or two, we were on our way to the river.  Ryan had fished this river a few times but had never pulled any fish over 20 inches from it.  Needless to say, he was a little skeptical about the stories I was telling him of monster fish as we approached our nameless fishing destination.  I assured him that this was the stretch of river where he was going to pull a monster.  After working up the river, catching and missing some great fish, we made it to a pool where we knew there had to be several large fish lurking.  After a time scouting the pool, Ryan readied his dry dropper rig, which was comprised of a yellow stimulator size 10 and a 20 incher size 14, and placed a beautiful roll cast right along the cliff wall.  Half a second later, he had a beautiful brown on.  Unfortunately that brown took him down under a rock and got wrapped around it.  We then determined it was my turn, and after few great drifts through the center of the pool, I hooked into a gorgeous 18 inch rainbow.  After a short but acrobatic battle, I landed and released the fish without harm back into the river to fight another day.

About this time I spotted him.  I could tell it was a great fish the moment I laid eyes on him.  By this time, Ryan had managed to unwrap from the rock and being his turn, I motioned him over and pointed out the fish.  You could tell from the look on his face that this was a fish he desperately wanted to land.  We decided our best approach would be a short cast up the cliff wall, a quick mend, and hopefully get a good drift down in front of him.  Show time.  Ryan places a beautiful cast in exactly the perfect spot.  The drift is impeccable and we watch the fish drift off the cliff wall and eat his nymph.  Hook set.....and an immediate break off.   To say Ryan was devastated was an understatement.  In our excitement to land that fish, we had failed to check his line for kinks after he had been wrapped around that rock.  Something we both know better than to do.   A weak point in his tipped had snapped as soon as he had set the hook.  Ryan spent the rest of the day in thought about how that big fish had bested him.

A week and several fishing trips later, I called Ryan up and asked him if he was ready for redemption on that fish.  It turns out that he had been chomping at the bit to get another shot at that fish and we settled on the next morning as the time we would target him.   As I mentioned before, it was a beautiful morning, the kind of morning that you just get the feeling that large, beautiful trout are on the prowl.  The kind of morning where legends are made, and stories are born.  We fished up to the pool where he resided, landing many nice rainbows and browns along the way until finally Ryan quit to double, no triple check his tippet and mentally prepare for a shot at the fish that got away.  We approached the pool with a low profile and sure enough, he was in the exact same spot he was in the first time we saw him.

We took our time.  We could tell he was feeding and there was no reason to rush it.  After many minutes of mental preparation had gone by, we decided it was now or never.  Ryan was going to focus on the drift, while I would get a better vantage and let him know when to set the hook, if it came to that point.  Ryan was casting the same rig he had tied on the first go round and he laid a perfect cast once again along the cliff wall.  Then something awesome happened.  The dropper had got caught in a swirl and had failed to drop very low and was hovering just below the surface.  I watched the fish come out and take the dropper right in front of my eyes! SET!!! I said in excitement and he set the hook true and firm.  The fish went into immediate head shakes and runs, but this was the day legends were made, and stories were born.  After a worthy fight and a fortunate quick netting job, the beautiful fish lay resting in our net.  He was even more beautiful than we had realized.  Ryan was so excited, all he could do was smile as he held up the fish.  The fish that had broke his heart, and now the fish that had brought him such joy.  After a quick photo, we released him, full of energy and vigor back into the river where he belonged.

As we watched him power away, we sat in silent acknowledgement that this is what drives us as fly fisherman.  Mixed around us was a beautiful river, gorgeous scenery, and mighty fish that demand the utmost respect of even the most seasoned fly fisherman.  And remember, if bested by a giant fish, never give up.  He will still be there and there will be another opportunity to even the score. 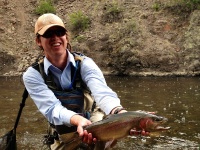