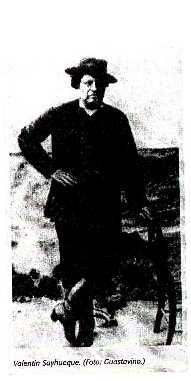 LORD OF THE APPLE COUNTRY   -THE LAST GREAT CHIEF

He was the most important Mapuche chief in the area and was respected by many chieftains. His influence extended from his homeland (nowadays the provinces of Neuquen and Rio Negro) up north to Mendoza and Southeast towards Rio Deseado.   Even the great Calfucura would not attempt to attack him.

Known as Chief Governor of the Apple country , his people were also called
“manzaneros “ , the apple people, because of the abundance of apples trees that grew in the area.  They used the fruit as food and to make “chicha “, a kind of cider.

Sayhueque was baptized into the Roman Catholic faith after his father was defeated by
national troops.  His father strongly recommended that he avoid confronting the “winka” (white man) because as a child and since his baptism he wore Christian clothes. This greatly influenced decisions made by Sayhueque when dealing with the Argentine government. His greatest desire was to avoid confrontation ruling over his people, cultivating corn, wheat, potatoes, apples, and the nuts from the Araucanian trees.

Although he  raised the Argentine flag  over his tent home next to rivers Caleufu and
Collon Cura (Ea. Alicura area),  in the 1880´s during the “desert campaign “ he
was pursued by the Argentinean army, and forced to flee south  to  Rio Negro and  Chubut. Finally  he surrendered and turned himself in at the fort of Junin de Los Andes along with 700 Indians and other caciques such as Foyel , Huenchenecul , Chiquichan , Pichi -CurruHuinca, Rayel, Chagallo and other chiefs  - January 1885 -.

A month later he went to Buenos Aires to petition and secures land for his family and his fellow Indians. His former chieftains and allies were imprisoned on the Martin Garcia Island
close to Bs.As. In the Rio de la Plata River and many others scattered and defeated found themselves lost without their leaders to guide them.

The newspapers interviewed Sayhueque; he met his old friend Francisco P. Moreno and asked for assistance. Sayhueque met General  J.A. Roca , secured formal education for his son Truquel  and eventually obtained  a vague promise of land from the government  but it would take  time and he lived for a long while at Chinchinales ( Rio Negro) far from the green pastures of  the Caleufu valley (Ea. Alicura area).

His people were taken to the Atlantic coast and then sent to Buenos Aires as prisoners,
families were ripped apart with children separated from their mothers, and young girls were given to families in Buenos Aires as servants. A large group of Picunches were
forced to march north to nowadays Mendoza province.

The “Conas “(warriors) were enlisted into the national army and many were forced into the Navy. Others were sent to the Northern provinces to work as Quebracho woodcutters and as farm labor under brutal conditions.

It was only after Roca became president that the once governor of the apple country secured land next to river Genoa (Chubut province)   .

Under the orders of president Roca and an official decree, explorer F.P. Moreno marked
the land most suitable for Sayhueque and his family   .

He lived there in the Chubut province, visited by old friends, travelers and
others.

He died in 1903 far from his green homeland wondering if it wouldn’t have been better to die fighting instead of being a friend to the argentine government and respecting the peace treaties that were broken by the central government.

Men like F.P. Moreno belong to those privileged few who are able to see beyond the common man. Their complex characters are difficult to understand and describe and it is only through his legacy that F. P. Moreno can be admired and somehow understood.

At an early age his love for nature allowed him to form an important collection of prehistoric fossils and Indian tools. Anything that his young inquisitive mind set an eye on would become under close observation.

By the time he was in his early teens he had formed with his brother a museum (the Moreno Museum). So good was this private collection that G. Burmeister, the director of the Public Museum, asked to borrow a “Panochtus “fossil to exhibit.

In 1871, yellow fever breaks out in Bs.As. and his mother, Juana Thwaites dies. Escaping the Yellow Fever the rest of the family moves to a farm close to the Chascomus Lake. There Moreno looks for and finds more fossils such as Glyptodont and many others that can be seen at La Plata Museum.

By the age of nineteen he owns a vast collection of fossils which many local scientists would have wished to possess.

Encouraged by important scholars he publishes his first scientific book. (1872).

1873 his desire to know more about the geological formations of the continent, flora & fauna   , natural history  etc. takes him on an expedition, finding skulls , thousands of arrow tips and breaking new grounds into south american anthropological studies. His work was published in Paris and read by many important scientists of the day creating a great interest in the studies of  the indigenous tribes of the continent .

In the meantime the land issues between Argentina and Chile are already beginning to create concern  because of Chilean claims over Patagonia  all the way down to Santa Cruz.

In July 1874 he is commissioned by Dr. Tejedor, then Min. of Foreign Affairs, to survey the Santa Cruz Bay and environs where the Chileans had landed.

The expedition lasted five months long enough for Moreno to get acquainted with the Tehuelche Indians, their traditions and language.

After this first trip he is encouraged and financed by the Argentine Scientific Society to go on another expedition to Patagonia,The argentine government also decides to support him and in September 1875 he heads south. Studies fossil deposits studied before by Darwin , follows river Rio Negro assisted by Indians, heads further south towards Limay river to meet chief Sayhueque but the Indians do not trust him because the Argentine
government had been  delaying rations which had been agreed upon.

Chief Sayhueque following his council decides to deny Moreno the right to head towards Chile.

Although Moreno could not complete the expedition as intended, he did manage to witness ceremonies and rituals never seen before and learns about the Indians ways, he is impressed by the beauty of the landscape, the potential of the land and dreams of a brighter future and a modern Argentina.

January 22nd. 1876 he arrives to Lake Nahuel Huapi where he hoists the Argentine flag and after further research he returns to Buenos Aires.

He is twenty three years old and the patagonian climate has taken its toll on his health. After a short rest the windswept and wild lands of Patagonia call him back. This time he intends to follow river Santa Cruz to its source.

He surveyed and mapped vast extensions of land hardly known to the central government.

February 15th. 1877
Overcoming the loneliness of the land, the weather and other problems he
reaches a huge lake which he named Lake
Argentino.

Once back in Bs.As. The Anthropological and Archeological museum of BS.AS. Is founded and he is named director.

1879. The Chilean issue claiming Patagonian land is escalating and Moreno is once again commissioned as Head of the exploring commission to survey lands. He accepts under the sole condition that all objects collected along the expedition should form part of
the museum which he directs.

It’s his second time to lake Nahuel Huapi, he visits friendly chieftains but the “desert campaign“ of the army against the Indians has begun and Moreno is taken hostage by Sayhueque in response to treaties broken by the argentine government. The situation is tense and Moreno and his companions fear for their lives so they decide to escape from the tents of Sayhueque (Ea. Alicura area) using a raft. One night they slip away floating down the Caleufu river into the Collon Cura river and then down the Limay. After seven days of starvation, hiding, fever and exhaustion   they find an army patrol and Moreno returns to Bs.As. weak and hardly being able to walk.

He is welcomed as a hero by many saves for the government officials who were
not as friendly Moreno criticized them for allowing too much land to fall in the hands of a few families who were connected to power.

Tired and disappointed by the government’s blindness and pigheadedness, Moreno travels to Europe where he lectures and studies in Paris. He is acclaimed there and highly respected but after a few years he returns to Argentina and travels north to Cordoba, San Luis, Mendoza and San Juan

1894 and onwards: He is again involved in the commission studying the borders between   Argentina and Chile. Relentlessly he carries on surveying and mapping. Almost single-handed he insists in defending the idea that the highest peaks of the Andes mountains are the natural borders to mark the lines between the two countries.

Again Moreno has served his country and President J.A. Roca gives him 25 leagues of land as a reward to his patriotism and sacrifice.


In 1903 he donates three square leagues next to Lake Nahuel Huapi as a legacy for the future generations of argentines. Thus creating the first National Park in Argentina.

He died with no money thinking that he had been forgotten and abandoned
by his fellow countrymen.

Time would prove him wrong, nowadays there is a great interest in this
giant of a man that did so much for Patagonia and Argentina.

His body now rests on Centinela Island in Lake Nahuel Huapi (Nahuel Huapi Nat. Park).  There he stands guard over his beloved Patagonia and as a reminder of his legacy to all
those who visit each year the National Park to enjoy its nature , ski resorts , lakes , rivers and forests .

Estancia Alicura
a Land with History 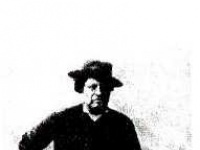 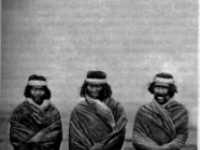 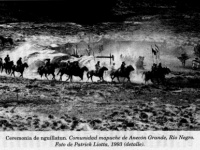 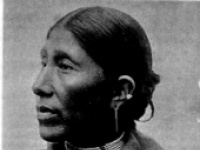 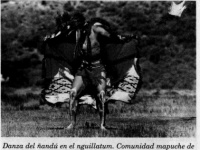 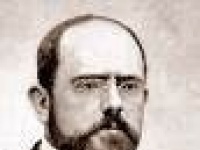 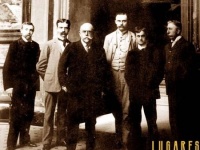 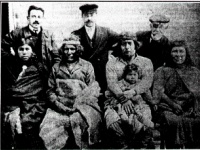 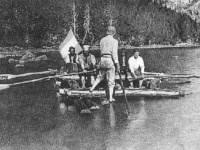