Venturing to live the finest fishing for Dorados in Argentina 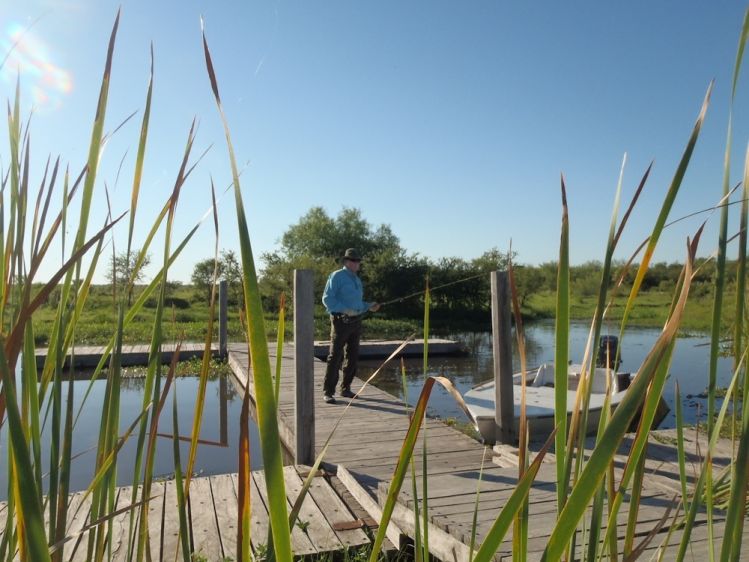 We have recently received the visit of Larry Stefanyk, a well known journalist, artist and fly fisherman from British Columbia-Canada, who owns a well appointed fishing magazine and who wrote 4 books already, about fishing salmon and trouts in BC.
As his trip was planned for December, to combine Patagonia Argentina and our northern area, we had to overcome the difficulties presented by the closure period that runs in the high Parana river from Nov 4th to Dec 20th. So we figure out, that the best idea was to present to him the Gold Rush, a program that combines 2 fishing days at Ibera wetlands and 4 days at the upper Parana river, two different landscapes and diverse water conditions, in the same trip.
We drove 4 hours from Corrientes airport to Ibera Lodge, where we were received with a nice and warm welcome from Ibera Lodge's staff.
Larry couldn't belive where he was, after flying thousands of miles from home on his first trip to Argentina, he found himself in the Ibera wetlands, a crystal clear wetland, with unspoiled landscapes, considered one of the largest and richest in biological diversity of our planet.
The first morning was tough. Larry was learning how to fish Golden Dorados specially on the Esteros. With casts not reaching the hot spots, and a little of unlucky, the morning wasn't profitable, Larry had lost the only two Dorados that attacked his fly. Both guides, Tulio and I, had decided to spend all day on the water as it was our first day and wanted to secure a good dorado for Larry's article, so we had lunch on a nice bend of the Corrientes river, where I could "quench the passion" of flycasting.

The afternoon became a different story. We had decided to shorten the wire leaders and to longer the tippet, because of the clarity of the water, in addition of Larry's improvment on his casts, turned on a powerfull combination that ended up on good action and nice size Dorados. But everything has a price, before we start landing fish, Larry had lost two big ones, one of them, never stoped running and on his second jump, it spat the fly, I knew that this one could have been a cover magazine, about 12 lbs Dorado. The other one also was a fingers burner, but the line didn’t. Larry looked at me and after a silence, and with a smile on his face says..."that was fun!" "the worst day of fishing is better than your best day of work.”Larry 0 - Dorado 2.
Soon enough, Larry was mastering the fishing technique for Dorados and started scoring and enjoying the wonderful shot of adrenaline that Golden Dorados normally give you.
The second day was as good, but the grand finale was a Dorado of 10 lbs. Was Larry’s last supreme cast between 2 floating islands, after his 3rd strip, a splash ! a nice Dorado took the fly that Larry had tied for his trip, proud of his pattern, shouted Fish on!. While I was helping to make the dorado come out from the island, Tulio turned on the motor to back the boat and hold it in position and Larry was fighting the fish with the line under the island. The fight was a nice and enjoyable challenge for Larry and he was pleased that he did a great job.

The first half of the journey had been accomplished and Larry was satisfied, but this was just the beginning, the majestic Parana river was still on our schedule, the GOLDEN FLY FISHING Grand Slam was the challenge to fulfill and was about to begin, different landscapes, diverse species, another story…TO BE CONTINUE 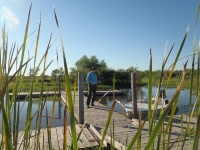 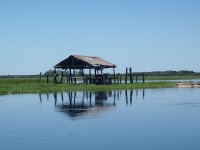 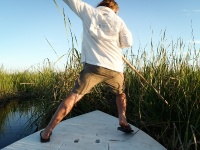 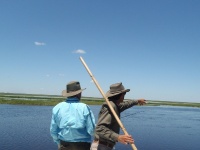 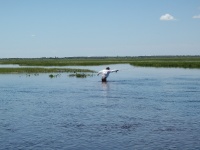 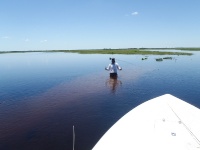 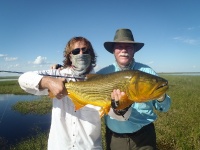 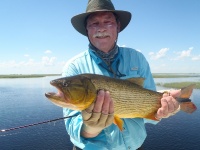 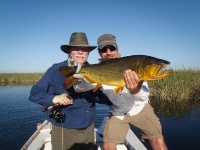 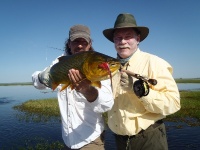 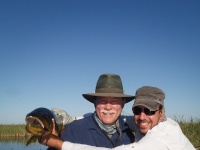 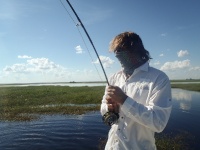 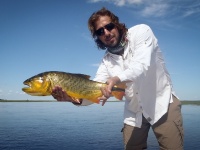 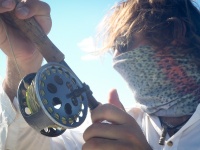 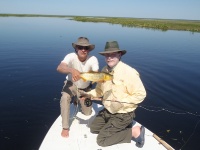 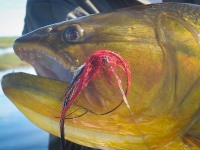 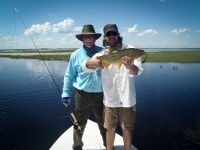 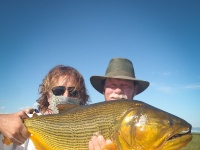