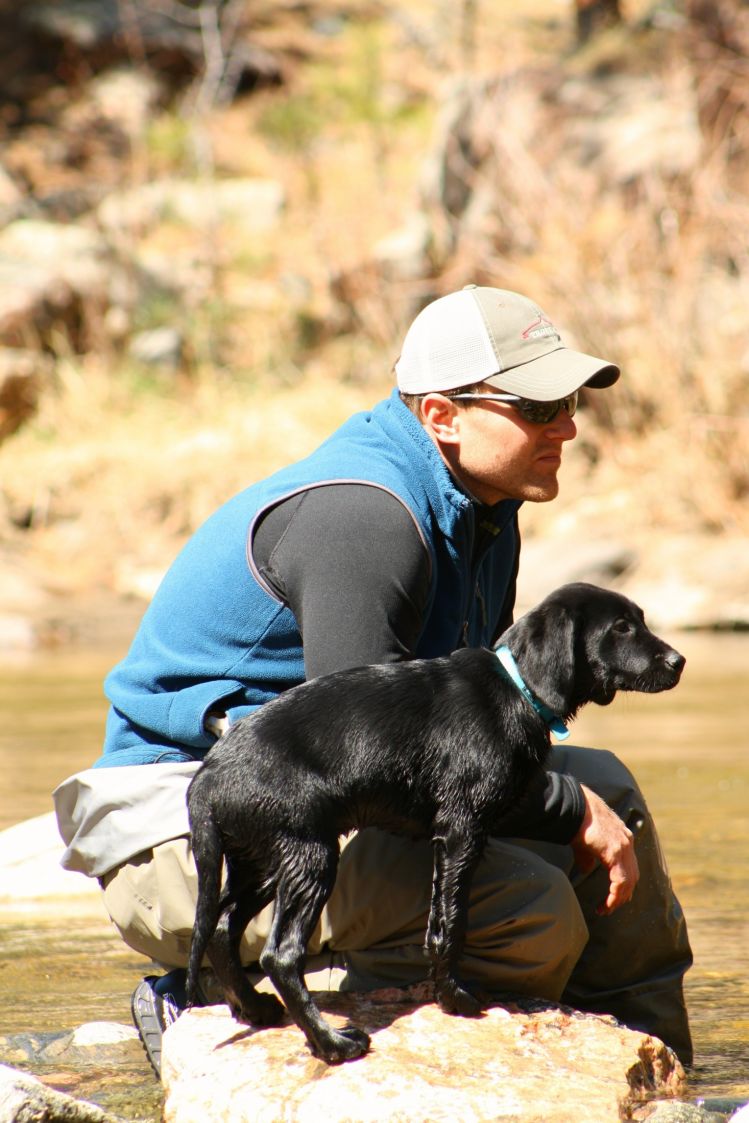 It’s safe to say that my life changed in a big way a little over a month ago. On March 1, 2014, I became the proud owner (some might say, “dad”) of an adorable 8 week old black lab puppy. We named him Hoyt; and no, he’s not named after the character from the hit television series, “True Blood.” I had several people ask me if he was named after this particular TV character and to be honest, I had never even heard of the show, much less watched an episode to know what they were talking about. My wife and I named him after the archery company. Ok ok, I guess it was me who named him after the archery company. However, in a few short days the name “stuck” and he has been Hoyt ever since. I know it might sound silly to all of you but he really does take after his name and looks, acts, smells, and sounds like a “Hoyt.” I’m not certain there is even a true definition for “Hoyt”, so you’ll just have to take my word on the fact that if there was a dictionary entry for the word, it would be describing a rambunctious, smart, and fun loving black Labrador that lives in Colorado. There might even be a little picture of his cute self that would quite literally melt your heart; that is until you actually met the pooch. Alright, perhaps that’s a bit harsh. He really is extremely intelligent and well mannered for his young age, but he is still a puppy after all.

If you just found yourself doing a google search for his name, perhaps you came across the urban dictionary. Apparently, there is a definition for “Hoyt,” and it really does suit him quite perfectly. See, I told you so. It’s somewhat ironic to find this, being that he was named before I ever saw the entry. I guess it really is true that people and pets tend to fit the meaning of their names. The urban dictionary online defines “Hoyt” as: ”A socialite of epic proportions. Someone who holds their own in any and all social situations. A savant of the social scene.” Just spend a day with him and walk through a crowd of people together and I almost guarantee that you will come to the conclusion that this defines him pretty accurately as well. Puppies have a way of drawing attention that’s for sure. There’s been more than one time when my wife and I have looked at each other and said something to the effect of, “It’s a good thing he’s so cute!” I am positive that God made them so cute to save their little hides, knowing they can be quite a handful at this stage of their lives. I really have no complaints however, he honestly is exceptionally smart and obedient, has a great personality, and more than a few times has surprised complete strangers with his disposition. He’s going to be a great friend and companion on my adventures.

By now you’re probably thinking, “Ok Greg, you have just written two paragraphs about your dog. What does this have to do with fly fishing or native trout?” Am I right? If so, stay with me, I’m getting there.

Even though Labradors are the most popular dog in America, I didn’t want that to stop me from owning one. I knew I wanted a sporting dog; one with lots of energy and who would accompany me in all my outdoor pursuits; whether bird hunting, fly fishing, backpacking, and much more. Sure, there were other breeds that could fit the bill, but there’s a reason labs are so popular. They really are that great. I wanted a dog that would come with me when I headed to the river with my fly rod, and I figured the best way to make that happen was to start taking him early on. So, on Tuesday, April 1, at only 12 weeks old, Hoyt took his first trip to the river. I had debated about taking him along for several days after making fishing plans with some friends, but I knew there was no way he was going to be left behind. He was one of the boys at heart and wherever I went, and I do mean WHEREVER, he wanted to be there too. It was that simple really; Hoyt was coming fishing with us. My only real concern is that he didn’t mess up the fishing for everyone. Labradors being so in love with water and people as they are, the last thing I wanted was for him to be running and splashing in the river and scaring all the fish away. I know my friends would have taken it well, but catching fish is typically high on the priority list for most fly fishermen. I didn’t want Hoyt to be the reason that priority was not met.

At the end of the day, I couldn’t have been more pleased with Hoyt. Not once did he interfere with anyone fishing or scare any fish away for that matter. He was simply part of the experience, having the time of his life. He never wandered away or caused trouble of any kind. He just wanted to be with us and make us happy, and he did. For the first couple of hours he wanted to be by my side so desperately, that he was willing to risk anything to make sure that happened. If we were wading out into the middle of the river, so was he. It took him a few minutes to gather the courage necessary and jump into the icy cold water of the Poudre river, but eventually his desire to please and be next to me won over and I turned around to see him swimming frantically in the current doing his best to reach me. I couldn’t help but chuckle at the sight of him and a warm feeling touched my heart the way it does when you have found a friend for life. He eventually found his way to me, with a little help from me of course, and I set him up on a rock just large enough to keep him out of the chilly water and just close enough to me so he didn’t feel left out. The poor little guy sat there shivering and whimpering, but he couldn’t be happier because he was with me. I only hope that I can provide the same kind of loyalty and love for him. I was overwhelmed with that display of affection. He was more than willing to put his own comforts aside, even if it meant freezing his little tail off, just to be right beside me.

His body eventually warmed up as the afternoon sun rays peeked over the high cliff walls of the canyon. Surely his energetic antics helped reduce the shivering; maybe some cuddles from “dad” played a part as well. Furthermore, he realized I wasn’t going to permanently leave him every time I waded out into the river and he became quite comfortable just being on the bank to watch us and play with whatever he could find. So comfortable in fact, that on more than one occasion I would look over and catch him curled up taking a nap in the sand or on top of a car sized boulder. I guess all that fresh air and a brisk swim tuckered the little guy out. One plunge in that cold river was enough for one day he was probably thinking each time he looked out at us.

Sometime in the afternoon when the water temperature rose, we started noticing trout rising to take BWO emergers and eventually, duns. One of my friends, Jason, tied on a dry fly and started catching small rainbows right away. Most fly fishermen agree that there is nothing quite like dry fly fishing, especially when there’s a hatch. If you haven’t yet discovered the joy of catching a wild trout on a dry fly, then you must make it your goal this summer to get out on the river during a hatch and make it happen! You will not be disappointed with the experience I promise.

Hoyt was incredibly curious of course when Jason reeled in this strange aquatic “thing” that flopped all over and felt all slimy on his tongue. He gently took the trout from Jason’s hand, after the hook was safely removed of course, and began to walk away with it as proudly as any dog or human could. Its not that I would have been opposed to Hoyt investigating his new discovery in his own personal way, but I also wanted him to understand catch and release if at all possible. I stretched my hand out below his chin, offering him a place to drop the fish, and he reluctantly agreed and gently placed it in my hand. Together we walked back to the edge of the river and released the unscathed rainbow back into the wild. He seemed a bit disappointed at this, but almost immediately, became distracted once again, when another fish was hooked and brought in.

It is a widely known fact that Labrador retrievers are praised for their soft mouths; meaning they carry things in their mouth without hurting the object. This is one of the many reasons labs are highly sought after from upland bird and waterfowl hunters particularly. It seems to be quite useful for us fly fisherman as well. 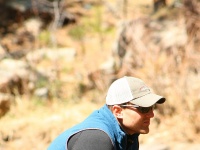 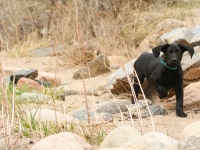 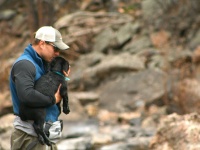 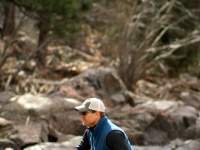 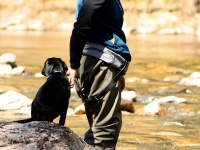 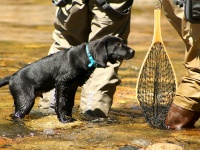 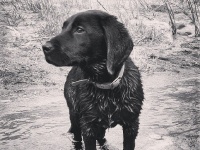