Sometimes you need a fly the size of a pigeon, and sometimes that fly needs to be heavier than your reel, but 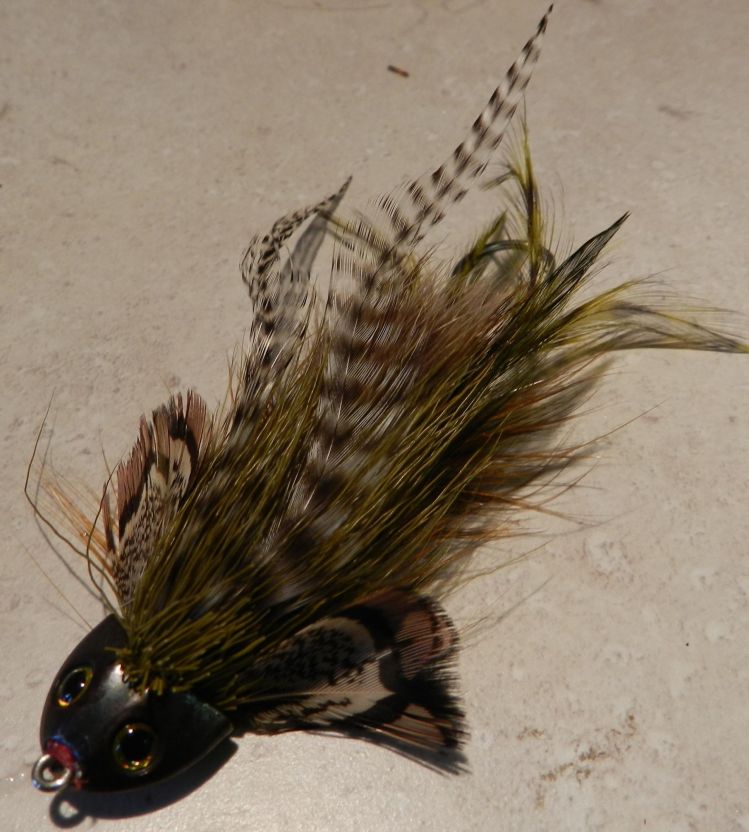 When water gets deep and fish get obese, big, heavy flies are in order, flies that even when strapped to a 14wt make it look like you're dodging a folly of arrows. Have you ever been hit in the back of the head with a 7/16th ounce chunk of lead moving at 90mph? Have you kept fishing after you realized your head was bleeding after being hit by said lump of lead? Probably not if you're a self respecting fly fisherman or woman with and ounce of sanity or minor grasp of the laws of physics...

Ok, so I do actually know how physics work rather well, but that doesn't stop me from chucking huge flies at large fish. The word casting doesn't or shouldn't actually apply, none of this beautiful back and forth, tight loops, or perfect presentations or any general scene from A River Runs Through It. Instead, just heave, duck, and KER-PLOP.

Once in the water however, these flies work real wonders, getting to fish deep quickly, jigging like a helpless (slightly deranged) baitfish, and having huge profiles to help even half blind fish in chocolate water find with ease. Muskies, pike, catfish, tigerfish, tarpon even, find these flies a steak compared to a sunflower seed. Real food.

Some may call blasphemy but i disagree. Is the manner in which you cast the way that determines what method you can call it? Does the lure you use depict what style it is? Well... Yeah... BUT THAT'S NOT THE POINT. The point is there's a grey area, and just because i struggle to cast 50 feet with such a heavy fly doesn't mean your 80 foot cast with a size 16 Adams makes you a better fly fisherman, in fact, i'm pretty sure muskies don't sip midges or mayflies off the surface, so there.

So go and look for something toothy, like "you should really go see the dentist bob..." toothy, give one of my big sculpins a try, the instructions are below and the pictures are beneath that, or make your own, that's always more fun anyway.

Attach orange silli legs, then 4 hackles, two cream under
two orange, having one of each color on each side. Attach a length of copper
wire.

Attach two more olive hackles, one on each side of the
orange hackles, then attach one orange and one olive hackle by the tips at the
base of the hackles. Move forward on the shank and tie in two angled pieces of
plastic tube, each on either side of the shank.

Go back to the rear of the shank and attach olive chenille,
wrap it forward to 1/5 inch behind the eye, wrap the two hackles forward and
tie off. *NOTE: I forgot to add a clump of olive deer hair at the hackles
before wrapping the hackles and chenille, but it doesn't matter that much I
guess...

Tie in 6 hackles by the stem (two cream, two orange, two
olive) pull them and attach matuka style using the copper wire. Yea, it's a lot
of hackle work. Would you rather be doing this with an entire tail worth of
buck tail? Didn't think so.

More hackles! Ahahaha, so many hackles it'll drive you mad.
Attach two grizzly hackles on each side of the matuka.

Not hackles for once. Tie in a clump of olive deer hair on
top and cream deer hair on the bottom, i don't stack the hair because i prefer
the ragged look for this fly. Then attach two ring neck pheasant body feathers
on either side of the shank, facing outward.

Cram on a 7/16th ounce sculpin head and trim the deer hair.
Then stuff two more pairs of pheasant body feathers into the head in what would
be the pectoral region on top of the other feathers. MORE PECTORAL FINS THAN
IMAGINABLE! 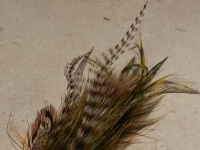 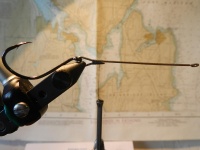 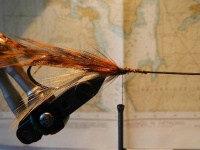 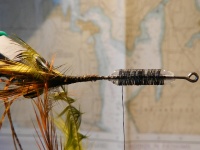 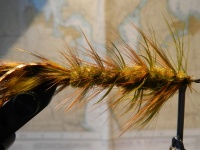 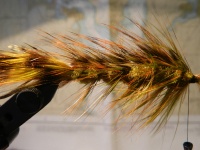 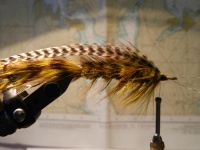 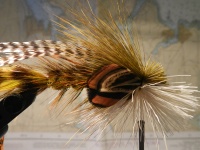 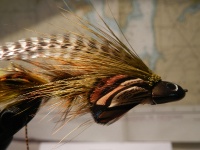